In the coastal waters of the US, a nation's leftovers have been discarded. Derelict ships, concrete blocks, scrapped cars, army tanks, tyres filled with concrete and redundant planes litter the sea floor. However, this is not waste disposal, but part of a coordinated, state-run programme. To recently arrived fish, plants and other sea organisms, these artificial reefs are an ideal home, offering food and shelter. 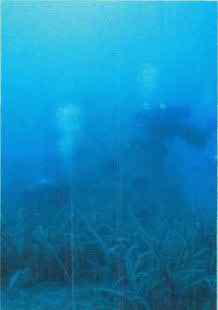 Sea-dumping incites widespread condemnation. Little surprise when oceans are seen as 'convenient' dumping grounds for the rubbish we have created but would rather forget. However, scientific evidence suggests that if we dump the right things, sea life can actually be enhanced. And more recently, purpose-built structures of steel or concrete have been employed - some the size of small apartment blocks -principally to increase fish harvests.

Strong currents, for example, the choice of design and materials for an artificial reef depends on where it is going to be placed. In areas of a solid concrete structure will be more appropriate than ballasted tyres. It also depends on what species are to be attracted. It is pointless creating high-rise structures for fish that prefer flat or low-relief habitat. But the most important consideration is the purpose of the reef.

In the US, where there is a national reef plan using cleaned up rigs and tanks, artificial reefs have mainly been used to attract fish for recreational fishing or sport-diving. But there are many other ways in which they can be used to manage the marine habitat. For as well as protecting existing habitat, providing purpose-built accommodation for commercial species (such as lobsters and octupi) and acting as sea defences, they can be an effective way of improving fish harvests.

Japan, for example, has created vast areas of artificial habitat - rather than isolated reefs - to increase its fish stocks. In fact, the cultural and historical importance of seafood in Japan is reflected by the fact that it is a world leader in reef technology; what's more, those who construct and deploy reefs have sole rights to the harvest.

In Europe, artificial reefs have been mainly employed to protect habitat. Particularly so in the Mediterranean where reefs have been sunk as physical obstacles to stop illegal trawling, which is destroying sea grass beds and the marine life that depends on them. If you want to protect areas of the seabed, you need something that will stop trawlers dead in their tracks,' says Dr Antony Jensen of the Southampton Oceanography Centre.

Italy boasts considerable artificial reef activity. It deployed its first scientifically planned reef using concrete cubes assembled in pyramid forms in 1974 to enhance fisheries and stop trawling. And Spain has built nearly 50 reefs in its waters, mainly to discourage trawling and enhance the productivity of fisheries. Meanwhile, Britain established its first quarried rock artificial reef in 1984 off the Scottish coast, to assess its potential for attracting commercial species.

But while the scientific study of these structures is a little over a quarter of a century old, artificial reefs made out of readily available materials such as bamboo and coconuts have been used by fishermen for centuries. And the benefits have been enormous. By placing reefs close to home, fishermen can save time and fuel. But unless they are carefully managed, these areas can become over- fished. In the Philippines, for example, where artificial reef programmes have been instigated in response to declining fish populations, catches are often allowed to exceed the maximum potential new production of the artificial reef because there is no proper management control.

There is no doubt that artificial reefs have lots to offer. And while purpose-built structures are effective, the real challenge now is to develop environmentally safe ways of using recycled waste to increase marine diversity. This will require more scientific research. For example, the leachates from one of the most commonly used reef materials, tyres, could potentially be harmful to the creatures and plants that they are supposed to attract. Yet few extensive studies have been undertaken into the long- term effects of disposing of tyres at sea. And at the moment, there is little consensus about what is environmentally acceptable to dump at sea, especially when it comes to oil and gas rigs. Clearly, the challenge is to develop environmentally acceptable ways of disposing of our rubbish while enhancing marine life too. What we must never be allowed to do is have an excuse for dumping anything we like at sea.

Questions 1-3
The list below gives some of the factors that must be taken into account when deciding how to construct an artificial reef. Which THREE of these factors are mentioned by the writer of the article?

Write the appropriate letters A-F in boxes 1-3 on your answer sheet.

Questions 4-8
Complete the table below. Choose NO MORE THAN THREE WORDS from the passage for each  answer. Write your answers in boxes 4-8 on your answer sheet.

Questions 9-12
Using NO MORE THAN THREE WORDS, complete the following sentences. Write your answers in boxes 9-12 on your answer sheet.

Question 13
Choose the appropriate letter A-D and write it in box 13 on your answer sheet.

13 According to the writer, the next step in the creation of artificial reefs is
A    to produce an international agreement.
В    to expand their use in the marine environment.
С    to examine their dangers to marine life.
D    to improve on purpose-built structures.